On November 15, 2020, a Federal Judge in Chicago granted class action status to a lawsuit accusing the City of Chicago of “towing without telling” – towing cars without providing advance notice to the owner.  The suit alleges that the City’s ordinance grants virtually unlimited discretion to City personnel to determine whether a car is considered “abandoned” and subject to a tow.  The plaintiff, for example, is a senior citizen with multiple sclerosis who is confined to a wheelchair.  For years, she legally parked her vehicle, which contains special lift equipment for her wheelchair, on her block.  City personnel nonetheless determined that the vehicle was abandoned and ordered that it be towed.  To make matters worse, the City does not send any warning or notification by mail to the owners of such vehicles.  In the end, the plaintiff’s car was towed and sold for scrap by the City.  By obtaining class action status the suit now covers thousands, if not tens of thousands, of vehicles improperly towed by the City.

The suit was covered by CBS Chicago, Fox Chicago, NBC Chicago, and in the Chicago Sun Times.

On February 25, 2020, a lawsuit was filed in Federal court alleging that the City’s practice of towing and selling vehicles for unpaid tickets is unconstitutional.  Each year the City takes tens of thousands of vehicles from Chicagoans, not because they are illegally parked or pose a safety hazard, but rather because the owner has outstanding tickets with the City, according to the suit.  In such cases, the City tows, impounds, and sells the vehicle.  None of the proceeds of the sale are given to the owner, nor are the sale proceeds applied to the outstanding tickets, the suit alleges.  As a result, the owner not only loses a car, but is also left with the existing ticket debt, as well as hefty towing and storage fees.  The lawsuit alleges that this practice constitutes an unlawful taking without just compensation in violation of the United States and Illinois Constitutions.  In addition to the City of Chicago, the lawsuit also names the City’ tow contractor, United Road Towing, as a defendant.

To read the lawsuit click here.  The suit was covered by the Chicago Tribune, Sun-Times, NBC, ABC, Fox, WGN, WBEZ, Crain’s, and the Roe Conn Show.

A lawsuit filed June 11, 2019 accuses the City of Chicago of “towing without telling.”  That is, towing and impounding thousands of vehicles without sending motorist the proper notice.  According to the suit, “the City is disposing of citizens’ vehicles without telling them and keeping the proceeds of the sale.”  Among other things, the suit seeks an injunction requiring the City to properly notify motorists before towing their vehicle.  The suit was covered by CBS Chicago and the Chicago Sun Times.

On November 29, 2018, a lawsuit was filed against the City of Chicago accusing it of issuing more than one City sticker ticket to the same vehicle on the same day.  According to the suit, filed by the law firm of Myron M. Cherry & Associates, LLC, this practice is specifically prohibited by Chicago’s own municipal code.  Shortly after the suit was filed, the City announced that it would nullify all duplicative tickets and offer refunds to those who were ticketed twice in one day.  Click here to view CBS Chicago’s coverage of the suit.

On July 17, 2018, Myron M. Cherry & Associates filed a class action lawsuit against the City of Chicago alleging that it assessed fines and penalties for parking, standing and compliance violations in excess of what is allowed under the law.  According to the suit, Illinois law set a cap of $250 for fines and penalties assessed on parking, standing and compliance violations that are adjudicated through the City’s administrative courts.  The suit alleges that despite this cap the City for years prosecuted such violations under a fine schedule that greatly exceeded the $250 limit.  The suit seeks refunds of amounts paid to the City, debt extinguishment and an injunction preventing the City from enforcing ordinance violations that carry fines and penalties in excess of the statutory cap.

The suit was covered by the Sun-Time, the Chicago Tribune and WBEZ.

On February 26, 2018, a Judge in Chicago approved an unprecedented $125 Million settlement of a class action against the City of Chicago relating to the operation of its controversial speed and red light camera program.  The suit alleged that the City ignored the requirement under its own municipal code to issue the appropriate notice to accused drivers and provide a 14 day grace period prior to issuing a determination of liability, depriving vehicle owners of the statutorily required due process and pre-liability notice.  The suit also alleged that the City prematurely assessed late penalties in violation of its own municipal code.  Collectively, according to the suit, these practices unlawfully accelerated the City’s ability to issue, enforce and collect fines and penalties.

Under the settlement, class members will be eligible to receive a partial refund of all amounts paid or the partial extinguishment of any debt owed on eligible tickets.  In addition, the City agreed not to count any of the eligible tickets for purposes of booting cars or revoking driver’s licenses.  The settlement also calls for the City to establish a debt relief program and automatically waive late payment penalties and collection fees if those are the only amounts owed.  The City also changed its notice and late payment penalty practices to conform to the law and, under the terms of the settlement, has agreed to continue to do so in the future.  In total, the value of the settlement exceeds $125 Million.

The historic settlement was covered by the Chicago Tribune, the Sun-Times, WGN, CBS, NBC and Fox.

On August 1, 2017, Myron M. Cherry & Associates filed a class action lawsuit against the City of Chicago on behalf of motorists who have been ticketed for distracted driving alleging that the City illegally stacked the deck against them in order to pocket millions of dollars in fines.  According to the suit, Illinois law requires all distracted driver tickets, i.e., those for using a mobile device while driving, be adjudicated in State traffic court where any resulting fines are shared with the State of Illinois and Cook County.  The suit alleges that for years the City illegally funneled these tickets to its own administrative courts, depriving citizens of due process and their day in court and allowing the City to keep all of the fines for itself.

The suit was covered by the Sun-Times, Chicago Tribune and CBS Chicago.

The United States District Court, in conjunction with the Chicago Chapter of the Federal Bar Association, awarded Jacie C. Zolna, a partner at Myron M. Cherry & Associates, LLC, with their annual Award for Excellence in Pro Bono Service. The Award is presented to area attorneys for their contributions in helping those most in need of assistance through pro bono work before the District Court for the Northern District of Illinois. This is the second time Mr. Zolna has been a recipient of the Award, having also received it in 2013. 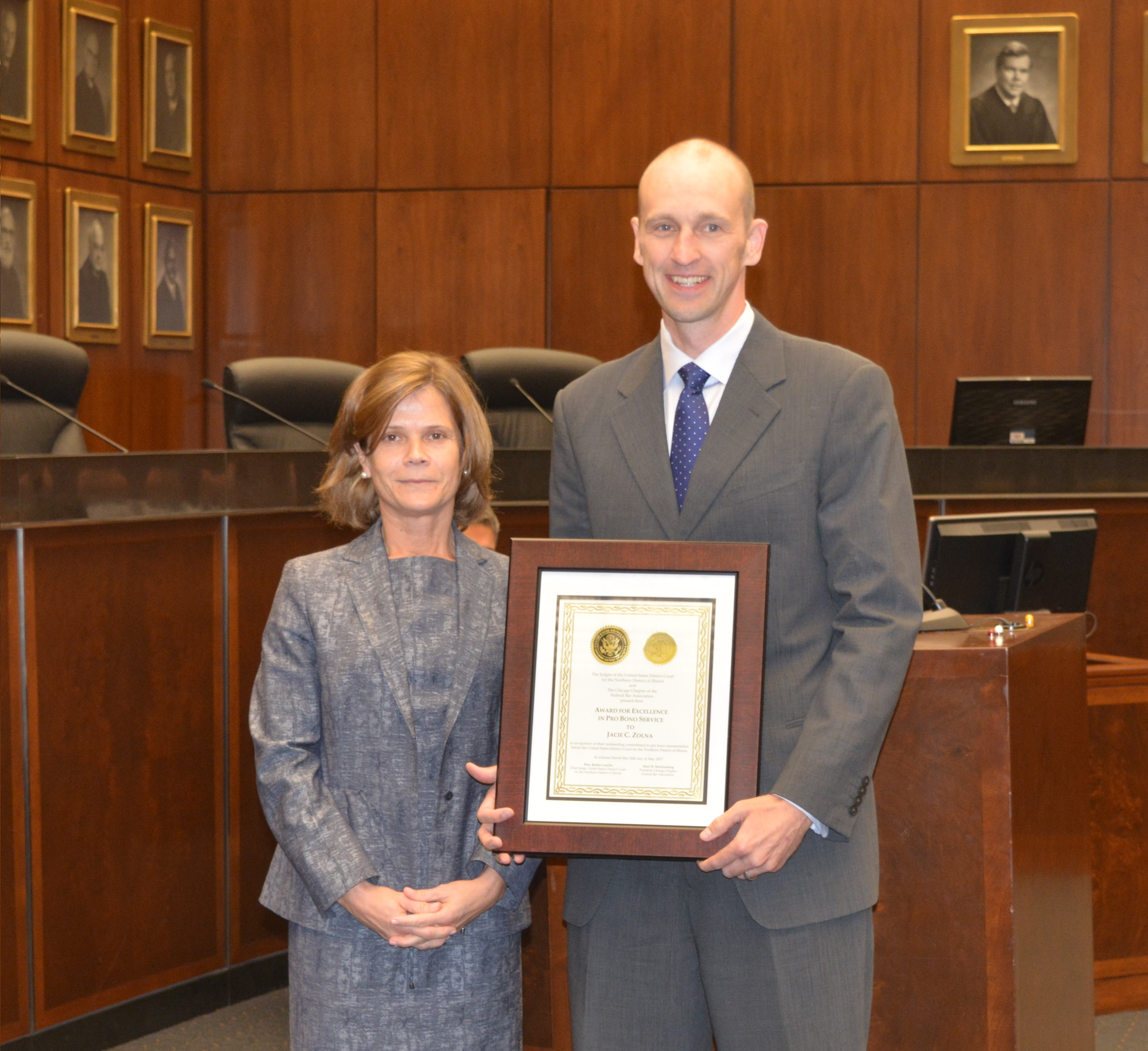 A Federal Judge in San Francisco granted final approval of a class action settlement in a lawsuit against Uber Technologies, Inc. (“Uber”).

The lawsuit alleged that Uber charged a 20% fee above the metered fare for each ride that it misrepresented as a “gratuity” that is automatically added “for the driver,” but instead retained a substantial portion of this “gratuity” for itself.  After defeating a motion to dismiss and certifying the case as a class action, the parties reached a settlement that provided full refunds of the amounts allegedly retained by Uber.

In approving the settlement, the Federal Judge who presided over the case found “that the Settlement is fair, adequate and reasonable,” noting that it “provides substantial relief to Class Members in that it refunds essentially the full amount of the gratuity charge Plaintiff claimed was retained by Uber.”

On February 10, 2017, a Federal Judge in Chicago granted final approval of a $2 Million settlement of a class action lawsuit brought by management pilots at United Airline against their union, Air Line Pilots Association, International (“ALPA”).

The suit alleged that ALPA breached its duty of fair representation in connection with the distribution of a lump sum payment from United Airlines for retroactive pay that was supposed to compensate pilots for a nearly three year delay in reaching a new collective bargaining agreement in 2012.  According to the lawsuit, ALPA created special rules and exceptions to its distribution methodology for a minority group of management pilots that artificially and arbitrarily reduced their share of retroactive pay or cut them out all together.  The $2 Million settlement represents a substantial portion of what the class would have received had they succeeded at trial.